Well the past few weeks have been a blessing with North East winds, so many people love the SW winds due to the bass fishing off Chesil, but I am growing fonder and fonder of the North Easterly winds due to the amount of species that creep in under most peoples radars, think about it.. what is happening when those waters are calm and clear for days on end? the mini species creep in and start setting up camp right under our noses, most traditional anglers who like sending the six ounce leads to the horizon with hooks the size of my palms will more often than not miss the species available to them within 20 yards. 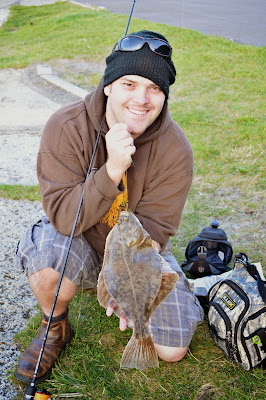 From the title you might have guessed it, the epic Weymouth flounder have returned and if you target them early you will be in with a good chance of a big female who's come in to drop off her young. I was shocked when the first flounder session saw me catch three decent size fish from the western harbour walls, finding the right place to put your bait or lure was key, the flounder seem to follow a particular path around the harbour, find that path and there's not a lot of waiting around for them, best time to target them is low water and the first two hours of the flood. 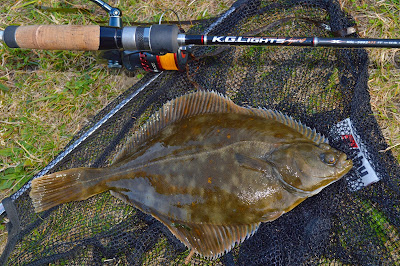 Now, many might raise their eye brow at this, but LRF isn't all about lures, we use bait all the time to mix it up and when lures just aren't cutting it, prime example is when the water is mud, a strip of mackerel or small rag will find fish, its also a way to find those fish before you target them on lure, "hot spotting" I like to call it, take a walk round the harbour and drop a bait in likely areas until you find the fish you are looking form, then switch over to lure and let the fun begin, the positive point to this method is you will find species kicking round in areas that you wouldn't have thought would be there. 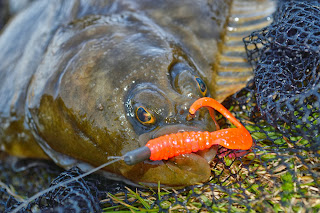 Small red Grub tails like these from JACKS LRF are devastating, keep hook and jig sizes small, 2-3g size 14 are perfect, I wrote a article for PlanetSeaFishing last year so follow this link and have a go at it.

So back to this "Hot Spotting", This past week I followed up on a bit of advice from a chap I regularly bump into at the tackle shop called Ben, now this chap is most likely one of the best anglers around, and when he gives you advice you had better listen up and learn, now the times I have tried fishing West Bay Harbour all I have pulled out of there is mackerel and the odd Goby, now what Ben told me was that there are more flatfish in that harbour then you would ever imagine, you just have to find them. West Bay harbour isn't a big harbour by any means, but it has taken me over a year to clue it up and find them.. well I didn't find them, Lolly's girls did!! 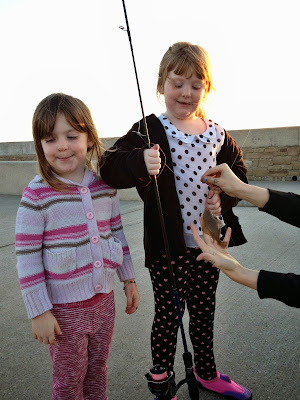 That afternoon saw us pulling out flatfish like no tomorrow! two hours fishing and mostly likely 20 plus flat-fish, I would like to add Dab and Plaice to my species list from this session, but getting a positive ID on the pictures we took on our phones is proving a nightmare, But I will leave you guys to guess and speculate. 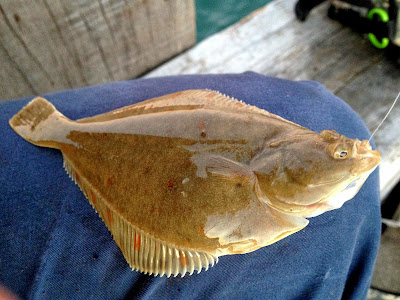 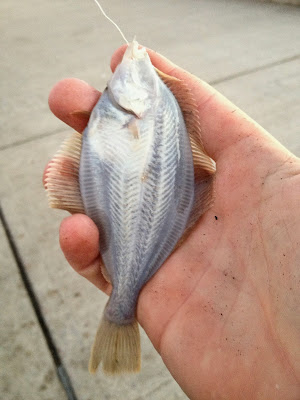 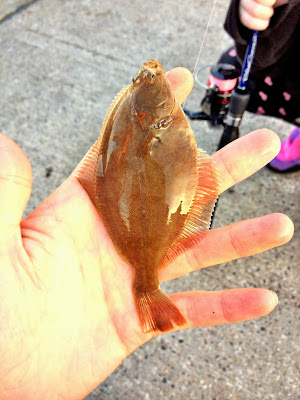 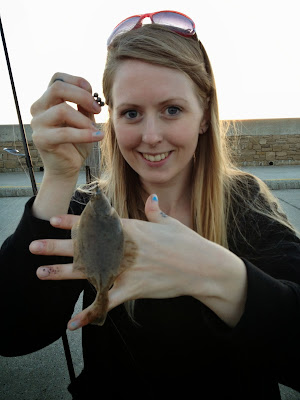 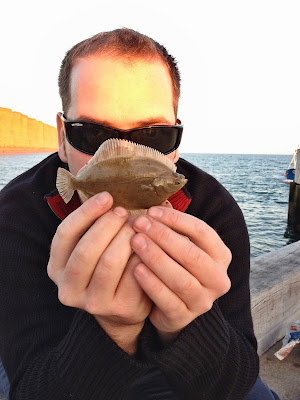 I also managed this little critter, which is a new species to the LRF list, Rockling!! how cute and small is that! 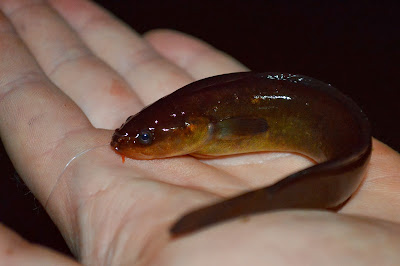 Me and Lolly had a quick session before tea one evening in Chesil cove and managed to find some impressive Ballans, Corkwings, Pollock and a little surprise for Lolly.. her first silver eel! 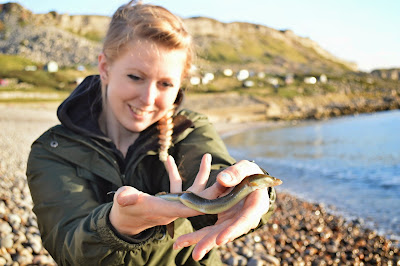 Now tensions were growing as this few hours of the session dragged on, Lolly wasn't having a huge amount of luck to start, and there was a very blunt reason for this that I will discuss in the next blog post regarding solid tip and tubular rods, but as soon as she saw this slime monster come from the deeps she was over the moon, the eel population across the UK is dwindling away slowly due to the development and construction of urban life, the more roads and highways we build the more boundaries we are placing in the way of eels travelling out to sea to breed, take care and respect these creatures guys because they are slowly becoming a rare sight in some parts. 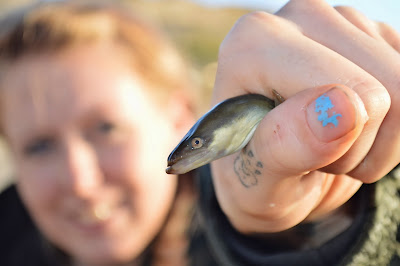 I managed a productive session with Andrew Mytton last weekend, where the truths of using a tubular and solid tip rod showed through, again.. I will cover this in the next blog post. 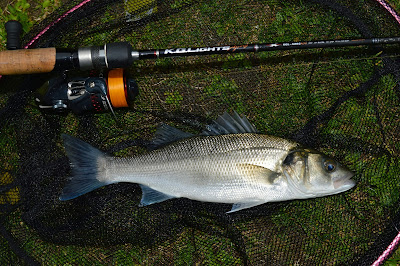 We managed 3 nice bass and a stonking flounder on a 5g running ledger using ragworm, seems strange catching bass on bait after years of lure fishing, but using a balanced set up like this and the results speak for them selves. Trust me guys, start using light rigs and LRF rods etc and you might just surprise yourselves, most of us seasoned LRF anglers are now fishing PE mainlines, the sensitivity and casting range benefits from these mainlines is incredible, coupled with the KG - Lights rod  and presenting a small modest bait at range and  its a whole new side of LRF/UL fishing. 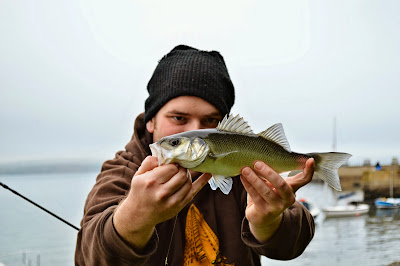 Don't leave home without the lures though! Andy decided he would have a smash at the Pollock as the evening drew in, easy fishing from the stone pier. 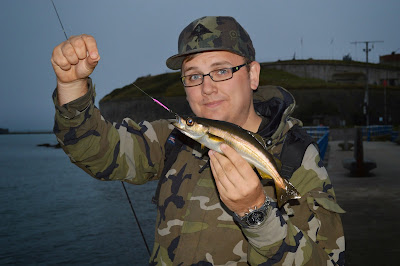 Lolly with her second squid from the stone pier, we learnt a lot this night about our inky friends the squid, full-moon killed our fishing out right, the high the moon got the worse the fishing became, its like the bright moon light throws them out of sink and they don't shoal up. I'm hoping as the years role on and I can gather some information and catch reports etc, I might be able to start profiling them like I did the bass and flounder, Sure is a strange species to understand. 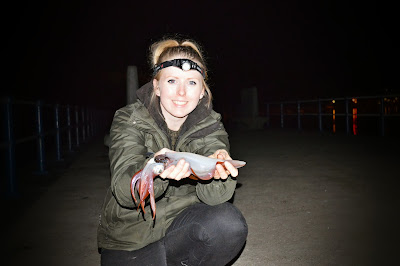 Hope you enjoyed the read guys, keep your eye on the blog, as the next post I will expand on the use of solid tips and tubular, especial where bait fishing is concerned as it becomes a lot more apparent..

Tight Lines
Posted by Will Harding at 20:57

The Best Custom Rods In The UK

Will Harding
I grew up on a Dorset farm near Cerne Abbas. I first started fishing at around the age of 10 at the local lakes at Lions Gate and Revels fishery. Learning to fish from books and fishing shows I soon picked up how to cast a line and tie a knot. After a few years of schooling I moved to Weymouth to pursue engineering. It wasn’t long before the sea became a new adventure and learning curve. With so much water in front of me I had no idea where to start, I had always mackerel fished with my family from a young age but the thought of a monster Pollack or a silver Bass was the holy grail for me. After being shown how to catch Pollack off Portland Bill with a red gill and a traditional spinning rod, the prospect of large bass was becoming real… the rest is history.